If you are looking for a Computing programming challenge, enabling your pupils to program a relatively cheap (~£12 each) controllable device, then look no further than the KS2 MicroBits Introduction challenge. 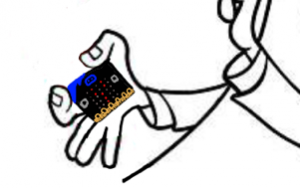 MicroBits are simple computers with a range of inputs from buttons to positioning data and temperature sensors.  They have outputs, such as an array of 25 LEDs, and can be linked to motors, lights etc easily.

MicroBits can be programmed using repetition and selection and also support variables via a simple web-based block programming language similar to Scratch.  MicroBits are programmed on a computer (PC/Chromebook) or on an iPad.  Programs are transferred to the MicroBits to run via USB cable or using wireless in the case of the iPad or can be run in a virtual emulator on the programming page.   Programs can make use of the same wireless communication allowing one MicroBit to talk to another!

123SOW Beta Testers can try out their algorithms and find out more in the KS2 Programming section of the grid or from the planner.  It is also our “Featured Challenge” for April.